a mere 67 years, actually not even 67 allotted to my father. He was barely 67 when he died in Oxford on his way to a meeting in Edinburgh, where he was to deliver a lecture for the international historians of medicine. He drove north from London, but when he reached Oxford, his pains were so great that he had to stop. There he was put into the hospital and died a day or so later. I was not at his bedside, indeed, the physicians who were trying to save him would not allow his wife, Beate Caspari-Rosen to enter the room, even though she was a physician. Until the day she died she regretted their abrupt separation. I was reminded of this event this summer, in July when I drove  to the perimeter-or more correctly-my husband Harold Olejarz- drove to a stop on the highway at Oxford. I did not have a computer to put up a commemoration of this admirable man; were he not my father, nonetheless I felt that his achievements and his plans were owed their due. Here I merely want to show some pictures, most have have been used already; others exist that have not yet been scanned. (Fathers are always older than their children, but when a child lives beyond the years of a parent's life the world is upended. Of course this applies equally to one's mother).  My father George--actually Joseph on the birth certificate--was born at home in Brooklyn. He was to live in the Bronx, Manhattan, and eventually in Connecticut in North Haven. He taught the history of medicine at Yale and also Public Health, and before leaving for Yale, he taught at the Columbia School of Public Health, now renamed in honor of its principal donor. My father never stopped working: he researched topics and wrote papers; he translated books into English; he edited various journals, including the Journal of the American Association of Public Health and the Journal of the History of Medicine and Allied Sciences. These are but a few of his institutional accomplishments. George Rosen was an artist too; his skill in rendering nature was rational yet beneath the "true/natural" lay a wealth of emotional content. His experiences in WWII were in the images he painted whilst in England during the Blitz and in Versailles, at the American Headquarters. Being a specialist in occupational diseases, he was able to apply his knowledge to the interviews that he held with members of the German High Command who were charged with  carrying out experiments on captured soldiers, the "unfit," including Jews and more. My father never talked about the harrowing information he learned; it was secret government data. But to carry this burden of tragedy with him surely affected him deeply. The odd paradoxical aspect of this facet of my father's life was that he acquired his degree in medicine in Berlin, at the University. It accepted Americans of Jewish background or practicing Jews in their classes despite their plan of the final solution. My father became utterly fluent in German during his student years in Berlin and when he left Germany he took with him his bride, Beate Brigitta Caspari. That was 1935. Thereafter he worked in NYC's Department of Health; later at HIP, fashioning educational programs for physicians and for patients. He was to have

two children with Beate, the world-famous breast pathologist, and Susan Joan Rosen (aka Koslow) who received a doctorate in the history of art. Both children, myself and my brother are immensely indebted to our parents from whom we learned so much. Curiosity was always valued highly and with it a world filled with wonder, natural history and the arts. Many were the days we went to dance performances directed by Balanchine and and also museums. where we were exposed to the greats of the days and from the past.
The gifts bestowed on us are legion and have shaped my life for the good. To both of my parents I am especially grateful; without their presence, my life assuredly would have been infinitely poorer. Thanks to my father I was given serious art instruction and my brother as well was regarded with as possessing unique skills.
So I lift my glass to Joseph/George Rosen whose ability to stay the course, his perservance in the face of adversity, whose kindness and sharpness were  critical for each child. Nor should I omit our dachshund ''schatzi" , our levely dacchshund who feel in love with my father and was most attached to him. Too brief was his life, but within it he accomplished so much and helped guided others too find their way too.

bloody path even in a peaceable setting.inexorable 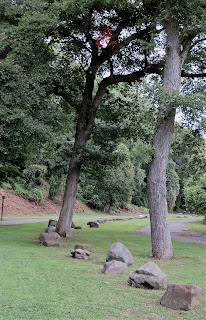